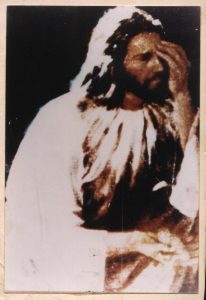 Pray for the Unborn, Aborted Ones

The original picture belongs to a very good friend of Valentina’s called Edda. She came across it in Berrima, NSW. Edda suddenly saw it fall by her feet on the ground during the prayers of the Stations of the Cross about seven years ago. Edda was surprised and as she picked it up she looked around to see if it belonged to anybody, the only people in sight were quite a distance away and it did not belong to them.

She decided to leave the image in the church believing it had to belong to someone. Much later nobody had claimed it so Edda took it home because of the unusual circumstances she had discovered it in. At the time, and even not that long ago what appeared in the palm of Jesus’ hands were 5 hosts – many can confirm that. Edda asked Valentina what it might mean (to present it to our Lord). Valentina told her friend that she must pray for the unborn. And that was that.

Now, just recently the image unmistakably presents a tiny baby in the palm of Jesus’ hands. It was requested if Valentina could post the image on her website and she was delighted.

It is simply a picture of Jesus, like all holy pictures we come across, with similarities to how Jesus really looks. In Valentina’s visions the beauty of Jesus she says, “I cannot describe. He has a brilliant beauty”.

Valentina also has this to say about the history of the picture:

The picture was meant for My friend Edda to pick up. Edda was very sick with cancer. We prayed for her in the hospital and prayed to the Infant Jesus of Prague. I sent Him to her and asked Him to touch her and heal her. A day later Our Lord responded, “I have done what you asked of Me”.

He had been to her and Edda actually saw Him near her bedside in the hospital. She felt happy and peaceful. Our Lord gave her peace after that encounter and the doctors did not find traces of cancer which were progressing quickly.

Of course when our Lord gives us graces He asks for something in return and to thank Him everyday. Jesus told me that Edda should pray for the unborn children, the aborted ones.