The Nativity of the Holy Family 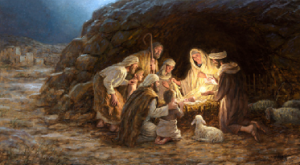 After I had just finished my evening prayers, I had a most beautiful vision of the Nativity of the Holy Family.

In the darkness of the night a most brilliant light, and radiance surrounded the stable, which was a large open cave. The silvery brightness from the light of the star was so intense that it was as though the star from the heavens had descended and shone directly above the cave. Everything was so bright.

Sitting in the middle of the stable was Mary the Mother of Baby Jesus, holding Baby Jesus on her lap. She was dressed in a most beautiful red tunic with a white mantilla that extended to her elbows. I could see how her hair was beautifully twisted around her head. Baby Jesus was all in white. I could see St Joseph kneeling beside them. Multitudes of shining bright angels surrounded them, praising and adoring the newly born King. Around the stable, facing Blessed Mother and Baby Jesus, I could also see many shepherds, kneeling in adoration. The holy shepherds were wearing garments of a combination of white and brown shades.

In front of the stable, I could see many lambs and sheep. The little lambs came up close to Baby Jesus. They were sleeping peacefully and gently resting their little heads on top of each other, as though they were resting their heads on the softest pillow. Their wool was so long and beautiful.

On the other side, behind blessed Mother, I could see lying on the ground an ox and also a donkey. This donkey was the one that carried Blessed Mother and accompanied St Joseph to Bethlehem.

As it was so cold in the stable, the animals surrounded the Holy Family to keep them warm.  Everything looked so beautiful and colourful and real.

So many angels were present, and I could see them prostrating before our Lord Jesus. Then they raised their heads to Heaven and, all in harmony, started to sing the divine canticle:

So that I would understand what they were singing the angels said aloud, “Glory to God in the Highest and Peace to people of goodwill.”

The Blessed Mother, most holy, was very joyful and smiling.

This scene took my breath away. I was praising the newly born King and the Holy Family of Bethlehem.

I said, “My little Jesus, may You be praised and loved by everyone in the world.”